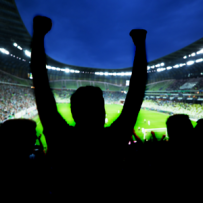 These were the words I heard spoken by Russell Wilson, quarterback of the Seattle Seahawks football team, to a reporter after winning the Super Bowl on Sunday.

Mr. Wilson spoke of how his father inspired him over and over again by challenging him to hold a perspective of possibility. “I just remember driving in the car with him so many times and him saying, ‘Rus, why not you? Why can’t you be the Super Bowl winning quarterback and do great things with that? You have all the ability, so why not you?’” Mr. Wilson, 25, said this week on Good Morning America.

My 13-year-old son Jake, who would love nothing more than to be an National Football League quarterback, has claimed that line. “Why not me, mom? Why not me?” And I looked at him and stopped seeing the 100-pounds-soaking-wet-5-foot-6-kid and recognized the power of the perspective you hold.

What Mr. Wilson is displaying is a great leadership skill – holding the right perspective. For Mr. Wilson and the Seahawks, the perspective “Why not us?” gave them the rallying cry of hope and potential. (When you say those words out loud, it’s amazing what they do to you. It’s almost impossible not to smile a little when you say them, not to feel the pulse of possibility quicken. Not to raise your head a little bit higher. Clearly, it worked for the Seahawks).

The Seahawks were the fourth-youngest team to win the Super Bowl. What if they held the perspective that they were too inexperienced to win this year, maybe next year would be their year? Mr. Wilson is the shortest quarterback in the NFL right now in a position where they are getting taller and taller (rival quarterback Peyton Manning of the Denver Broncos is 6-foot-5). What if Mr. Wilson held the perspective that many did – I’m too short, too small and not strong enough. Where would he be now? Probably watching from his living room couch, I suspect.

What perspective are you and your team holding? Do you even know? Does everyone have the same perspective? Does it serve you or them? Would you be better served to change it? Does it empower or diminish? Does it create fear or energy? Does it make you drag your heels or put a bounce in your step? Perspective is everything. A great leader will help determine a perspective that inspires and empowers his or her team, and communicate it regularly.

But let’s get back to “Why not you?” for a second. If you applied that to yourself, what would you do? How high could you jump? How far could you throw? What is your “Why not me?” for 2014?

Katie Bennett (@dbdcoaching) is an executive leadership and team coach in Vancouver, and is president of Double Black Diamond Coaching.